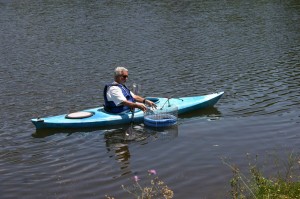 In my last blog post about summer festivals, I suspected I had missed some – and I certainly did! NEXUS’ own Bob Becker is in Fairbanks, Alaska, this week for the Alaska Midnight Sun Chamber Percussion Intensive. Morris Palter is co-faculty with Bob. It’s part of the two-week long Fairbanks Summer Arts Festival. The week culminates in two showcase concerts, one of them featuring repertoire selected from Cage, Reich, Takemitsu, and a number of Bob’s own works such as Mudra, Away without Leave, Unseen Child, Prisoners of the Image Factory, Turning Point, and some of his and Bill Cahn’s ragtime arrangements.

Meanwhile, Russell Hartenberger is in Arizona, while NEXUS business manager Ray Dillard is home briefly from a film-music recording project in Texas, before heading out to New Hampshire and beyond for more projects. Garry Kvistad’s “Woodstock Chimes” site tells us that he is involved in a Save the Turtles ecology project, installing turtle guards in the Woodstock pond! I’m not sure where Bill is right now – it’s very hard to keep track! But all of NEXUS will be converging on Ottawa next week for the Ottawa Chamber Music Festival. This will be an opportunity for NEXUS to perform together (July 31st, St Brigid Centre for the Arts), rehearse and discuss new repertoire for the upcoming season, and maybe even have some photos taken. Yours truly is preparing for vacation on Canada’s East Coast. Wherever on the map YOUR travels take you, have a wonderful time. And if you are near Ottawa, drop by to hear NEXUS perform!