I recently received an email from a student working on a DMA project.  The email contained questions about “Afrodditty,” a piece that exists in two related versions – 1) a timpani solo in “Six Concert Pieces for Solo Timpani” (Meredith/Hal Leonard Pub.), and 2) a snare drum solo in “NEXUS Suite” (HoneyRock Pub). The two versions may also be played together simultaneously as a duet. 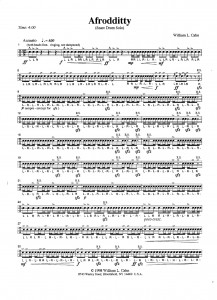 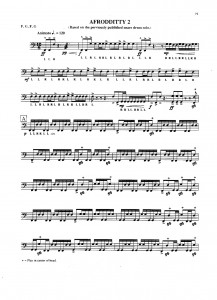 Question: There are several sections of Afrodditty that seem very djembe-like.  Were you trying to capture the 3 basic tones and style of djembe playing when composing Afrodditty?

Bill Cahn: There was not a conscious effort to replicate any aspect of djembe hand-drumming style or technique.  That being said, the time signature (12/8) lends itself perfectly to rhythmic patterns found in drumming throughout west Africa – including not only the French speaking countries where the djembe is in widespread use, but also the English speaking countries where stick drumming is more common.

Q: Measures 50-52 have a particularly unusual sticking indication that is both challenging and interesting.  What prompted your decision for this particular sticking pattern.

BC: The stickings in that section were generally determined by the double 16th-notes, which  always occur in the right hand (at least until bar 57, where there are back-to-back 16th-note patterns).

Q: The snare drum solo is an important part of percussion education.  Do you see it ever developing a wider audience with the general music appreciating public?

BC: Basically, snare drum solos don’t occur much outside of percussion recitals.  Notable exceptions might be in a show like “BLAST” or in drum corps events or ancient rudimental musters.   However, I have also heard snare drum solos performed as a feature piece within the context of solo and ensemble concerts, usually by well-recognized artists, such as Evelyn Glennie.

Q: Do you have plans for any future works for snare drum?

BC: I am currently working on a set of five solo snare drum pieces titled, “TIME ZONES.”  I hope to have them published soon.

Q: Can you provide any insight into John Wyre’s piece, Cinq?

BC: Cinq is French, of course, for “five.”  There were 5 members of NEXUS when “Cinq” was composed.  The piece is in 5/8.  Some of the measures are repeated five times.  I hope these responses are helpful.