It’s back home again after a week of vacation in Massachusetts – Stockbridge (Red Lion Inn), the Old Deerfield Inn, Sandwich Village on Cape Cod (Daniel Webster Inn), and three days in Boston, where Ruth and I heard absolutely no live music (but plenty of Kenny G’s saxophone in almost every restaurant, cafe, and elevator; what’s the deal with that?). This was an art and history vacation, so we spent a day in the Fine Arts Museum. I last visited the Boston Museum of Fine Arts in 2000, when NEXUS performed with Seiji Ozawa and the Boston Symphony. I remembered the American collection, but I was nevertheless completely overwhelmed by seeing the magnificent work of John Singleton Copley again. His portrait of the youthful John Quincy Adams was particularly stunning in the way the character of the subject was captured – with Adams’ penetrating eyes radiating intelligence, insight and ambition.

One of the fortunate coincidences was that the room-size painting of “Washington Passing the Delaware” by William Humphrys (1794–1865), an American born in Ireland, was on temporary display. Several weeks ago I had read a lengthy article about this piece in the Wall Street Journal. The painting is not the more familiar work of Emanuel Leutze that is at the Metropolitan

Museum in New York. In this painting Washington sits mounted looking back from a vantage point on an embankment at his troops disembarking on a blustery night.

A few years ago Ruth and I visited the National Historic Site at Washington’s Crossing on the Delaware River, and we didn’t remember the embankment portrayed in the painting. We do remember a fantastic bass drum that was exhibited at the National Historic Site, but the drum was likely not part of the events leading to the crossing of the Delaware and the Battle of Trenton, because bass drums were not in regular use by military bands until a few decades after 1776.

Of course, the Boston Museum also features the bombastic work of John Singer Sargent, whose chops with oil paint in the posturing and placement of his subjects and the character revelations in their facial expressions literally burst out at the viewer, displaying no small amount of the painter’s self-confident swagger. It is plainly evident why Sargent’s work was in such favor with the Boston (and European) elites.

The delicate and sophisticated silver work of Paul Revere was also impressive to see again, as were the many wonderful examples of fine 18th-Century furniture. After almost 5-hours of such treats, we walked outside into a chilly damp drizzle for several blocks to the Isabella Stewart Gardiner Museum, which is currently in the process of adding a new building to augment the dark and worn facilities in the old building, though the old building’s courtyard garden was still fantastic. 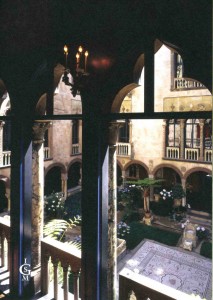 The most memorable piece for me at the Gardiner Museum was the Rembrandt self-portrait in the Dutch Room on the second-floor. I was reminded of the NEXUS world tour in 1984 during which I had visited a number of art museums – Rijksmuseum Amsterdam, National Gallery of Scotland Edinburgh, Walker Gallery Liverpool, and the National Gallery London – where I saw five Rembrandt self-portraits that were painted at various stages of the artist’s life. Of particular interest was the self-portrait in the Rijksmuseum. In that painting Rembrandt displayed himself with a self-assured smirk that eerily resembled an expression we in NEXUS had seen many times on Michael Craden’s face. (in fact, to me this could have been convincingly labeled as a Craden self-portrait.) In contrast, this self-portrait at the Gardiner showed a young Rembrandt, self-confident to be sure, but without the swagger; rather, the young artist appears to have still been on a search for something more.

On our second day in Boston we walked around Boston and Charlestown for several hours on the “Freedom Trail,” including the Old South Meeting-House, the Old State House, the Paul Revere House, and the Bunker/Breed’s Hill Monument, among a number of other sites. Our full day of immersion in Boston (and Massachusetts) history clearly showed us that Massachusians(??) certainly pride themselves on their 18th-Century founding fathers’ heritage, though it’s sometimes hard to separate historical fact from myth and legend – not unlike the current reflections on the 150th year since the start of the American Civil War. NEXUS was just in Virginia and the Civil War is still very much on the minds of folks there, judging from all of the reminders evident everywhere in buildings, battlefields, books, public plaques, etc. (more about this will follow at a later time.) 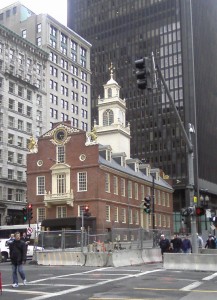 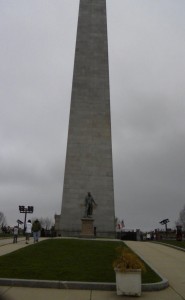 In Boston the Revolution is still very much a presence. However, there are two sides to every story, and I’m not at all hesitant to admit that the 18th-Century Tories did have some good reasons to be wary of the radicals. For one obvious thing, the colonial farmers had access to an enormously prosperous and worldwide market in the British Empire, protected by the world’s largest and most powerful army. For another thing, only a few years earlier the British, at a great cost to themselves, had protected the colonies in the French and Indian War, and some of the new taxation in the colonies was aimed at recovering some of those costs. King George’s mistake was perhaps being too heavy-handed, when by simply permitting the colonists’ grievances to be expressed the whole revolution might have been avoided.

Fortunately for Ruth and me, Boston today also has a number of fine restaurants, and one in particular was outstanding – “Mama Maria,” right across the street from the Paul Revere House in the North End and the only 4-star North Italian restaurant in the city. Our history day was graciously capped with a fine Italian wine (Brunello di Montalcino, Altesino) and a very memorable dinner consisting of Lamb Gnocchi (in a wonderfully light bean sauce), Mushroom Polenta, Artichoke salad, and Sfogliatelle – a delicate puff pastry dessert filled with almond paste . . . . and . . . blessed quiet . . . no piped-in music.