I was treated to a great surprise recently while on a trip to North Carolina.  It seems there is an extraordinary boy named Nolan from Chapel Hill that is in love with Woodstock Chimes.  He visits our website daily (www.chimes.com) and has gotten to know our product line better than most people!  The managers of Woodstock Chimes were visiting a wonderful account of ours called Cameron’s in the University Mall.  We had heard about Nolan and had invited him and his family to meet us there.  We spent an hour or so meeting everyone and having a fun time with Nolan and his friends.  To everyone’s amazement, Nolan had some amazing talents regarding our windchimes.  He was able to name every chime as we played them, even the newest offerings for the season.  Nolan is such a fan of Woodstock Chimes that he uses our chime names for nicknames of his family members.  His mom, Kara, is Pachelbel Canon, which Nolan said was his favorite Woodstock Chime.  He even dressed up as a Woodstock Chime for Halloween this year!  In addition to playing and naming all the chimes, Nolan is a good little drummer.  We “jammed” on Kid’s instruments from our Woodstock Music Collection and I was blown away with Nolan’s solid sense of beat and creativity (his friends Joseph and Ava “got talent too”).  I think he is going to have a lot to choose from as he grows up.  Will he be involved in a windchime business, will he be a musician, will he be a winner on “America’s Got Talent”?  None of that will be really soon since Nolan is only four years old!  He was born several months early and weighed only 1 lb 2 oz.  When he’s my age, Woodstock Chimes will be 88 years old!  Maybe he’ll be the President (of Woodstock Chimes or the US) at that point.  Nolan has special talents and is now a special friend of mine and Woodstock Chimes.  Here’s a short video of the highlights of that encounter:  http://www.youtube.com/watch?v=Wo60zSpopEo 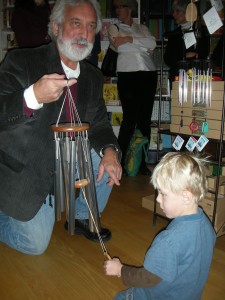 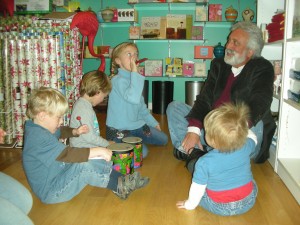 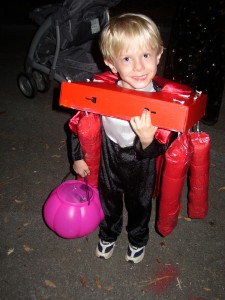 Nolan as a Woodstock Chime, Halloween 2010