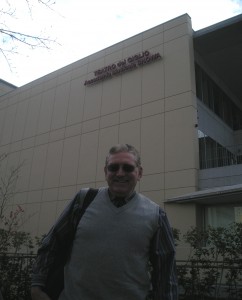 I’m in Japan again for the third time in 2010 for my 2-week teaching residency at the Showa Academy of Music.  I finally arrived at my hotel room in Kawasaki at 5:30 AM Rochester time – exactly 25-1/2-hours after waking up at home. The flights from Rochester and JFK were smooth and uneventful.  This time I flew a different route than the usual from Chicago taken in past years.  I had a good window seat in Business Class, so I had a great  observation point.  The flight basically went over Pittston (Vermont), Ottawa, James Bay, across northern Canada and over the north shore of Alaska in the midday darkness (the town lights of Barrow, Alaska shining in stark isolation in contrast with the horizon-to-horizon blackness of night), then across the icy Bearing Strait and over Siberia, which with a crystal clear daylight sky, could be seen as a pure white carpet of snow-covered, rolling mountains  (in contrast to the pointy peaks of Alaska’s Brooks Range) as far as the eye could see, without the remotest sign of human or any other animal or plant habitation.  Siberia was awesome from 30,000-feet high, thanks to the fact that flights between North America and Asia are permitted to use Russian airspace; in decades past they had to circumvent Russia.  After Siberia, the plane flew down along the western coast of the Kamchatka Penninsula and then over Sapporo to Narita – 13-1/2 hours of flight in all.  Kaz (Kazunori Meguro) and his wife,Yashio (Sudo-sensei), greeted me at the airport.  In contrast to cold Rochester, the weather at Narita was mild, requiring maybe only a light sweater.  The 2-hour drive to Kawasaki was briefly slowed down in the Sunday night traffic coming back to Tokyo from Disneyland, but then from Haneda airport at the southwest end of Tokyo and though Yokohama everything moved right along.  As we approached Kawasaki we were passed by a bus with a large sign on the back that read, “Non-Step Bus” – an obvious attempt to say “Non-Stop Bus” in ‘Jap-lish.’  I had to chuckle at yet another “lost in translation” hybrid phrase, which when given further thought, can offer some conceptual entertainment. 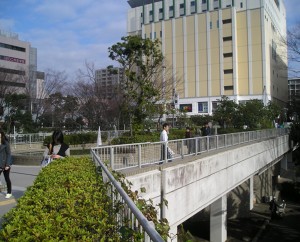 After crashing at 9:30 PM Sunday night and waking up on Monday morning at 4:30 AM (typical for day 1 after arrival in Japan) the first day of teaching began with a 10 AM meeting of all of the freshmen in the percussion department.   One-by-one the students gave their names followed by a brief statement in English of their favorite things.  The most common favorites were sleeping, eating, and marimba (in that order) with token favorites like card games, jokes, and shopping.  In response to the student who liked jokes, I told the joke I learned from Peter Erskine about the difference between a man falling from a 2nd-floor window (“plop . . .ahhhhh!”) and a man falling from a 10th-floor window (“Ahhhhh! . . . plop”), but not  a single smile was to be found in the room – only quizical stares. (Maybe it was my delivery.)

The first lesson started at 11 AM with Asami, a 4th-year student I had coached in past visits. She played “Etude No. 5” from “30 Studies for Four Kettledrums” by Jan Zegalski (pub. by Polskie Wydawnictwo Muzyczne SA, Krakow, Poland in 1971).  I didn’t know these etudes, but  they looked quite good.  “No. 5” was played really well by Asami.  We had a good discussion on playing spots and their uses for certain sound issues, especially in relation to subito-piano phrases following forte 16th-note phrases, in which the  after-ringing of the timpani tends to mask the subito-piano, without providing any opportunity to hand-dampen the ringing.

After lunch (3 Chinese style dumplings with salad), I coached the freshman marimba ensemble playing a manuscript arrangement of “The Entertainer” by Scott Joplin.  The main issues were dynamic contrasts, ensemble balance, and phrasing with accented and ‘ghosted’ notes.  For the percussion accompaniment (cymbals, hi-hat, and cajon) I suggested losing the hi-hat and simplifying the accompaniment rhythmically – avoiding “swing” stylisms.  (Note: The cajon is not typically a part of the classic ragtime genre, but “what-the-hey!”)

Finally, Sayuri played Movements 2 and 3 of the Jolivet “Concerto for Percussion.” 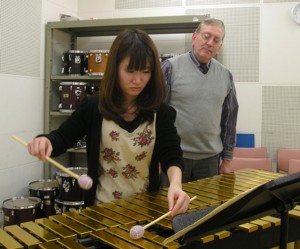 The main issues here were: 1) preparation of the ratchet by mounting it on a stand; 2) stick tray placement in order to avoid laying sticks on the xylophone, 3) judicious use of stick-dampening on the vibraphone, and 4) preparation of the sheet music to avoid having to remove sheets away from the music stand.  The xylophone part is challenging rhythmically, with sustained off-beat patterns, but Sayuri played them note-perfectly – Yea!

Now it’s back to the hotel for dinner and catching up on emails.