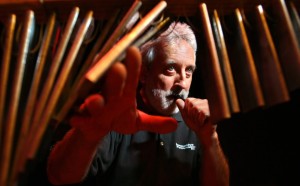 Every once in a long while I have a look to see who has been blogging about NEXUS. For example I just caught a glimpse of our very own quartet at percussionist Abby Savell’s website, where they were captured on film with her new baby during rehearsals for the Ojai Music Festival in 2008. Likewise, Steve Mazey blogged about NEXUS a year and a half ago in his Ottawa Citizen blog Classical Ottawa. They also ran a great shot of Garry Kvistad (see left) rehearsing at the Museum of Civilization in Ottawa. Here is what Steve had to say in his blog:

“The Toronto percussion group Nexus played the Canadian Museum of Civilization Tuesday to a crowd that nearly filled the theatre…Because of deadlines, I was able to stay for only the concert’s first half, but I loved the music I heard…The music…included an immensely likable piece by John Cage that included drums, party noisemakers and a toy piano. The players then produced some beautifully shimmering sounds in a set of Takemitsu songs they’ve arranged, performing on vibraphones,  xylophones, tiny squeezeboxes and other instruments. It was nice to see that more than a few parents had brought teens and children to the concert, and the young listeners seemed as caught up in the music as everyone else was. There was a refreshing silence throughout the performance. I would love to have been able to hear the second half.”