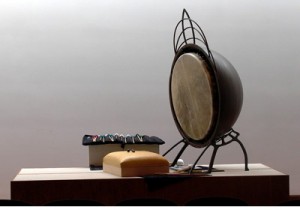 If you have booked NEXUS, then you know Ray Dillard, the NEXUS Business Manager. He’s the man we turn to when we need to know if a gig can work logistically. He can tell us how many cases each instrument set-up takes, what we need in terms of light and sound, how many hours we must allow to get there, what we need for customs and immigration. He keeps the NEXUS calendar up-to-date (no mean feat, considering the many irons that each NEXUS member has in the performing arts fires!) And through furious tenacity, he got this great new website up and running.

But, if you can believe it, Ray does far more than that. A very talented percussionist himself, Ray has, like NEXUS, toured worldwide, performing with several different ensembles. One of his most unusual projects was The Breast Drum Project with sculptor Marlene Hilton Moore. Hilton Moore designed the 5 foot high Breast Drum and Ray coaxed from it an amazing variety of sounds and music in full-length solo performances across eastern Canada.

Born in Texas where he played with the Amarillo Symphony and taught at several different universities, Ray is now a proud Canadian citizen. He takes great delight in our unique Canadian icons: moose, for example. Or butter tarts! (No butter tarts in Texas! Can you imagine!) I haven’t tried him out on Nanaimo Bars yet, but I’m sure he’ll love ’em simply because they’re Canadian. Among his diverse interests and talents he is a coffee aficionado, (roasts his own), and he is also a fine cook who of course loves Tex-Mex, the hotter the better.
Ray has an intimate knowledge of NEXUS repertoire, and has produced some 15 NEXUS CDs,  recording and editing them, including the Juno-nominated “Drumtalker”. You can read more about Ray and some of his interesting seminars here including his Dusk Till Dawn Music Retreat. He also works on instrument design with Mountain Rythym Inc. in Lakefield, Ontario. Just for fun, go have a look at his technical critique of djembes!