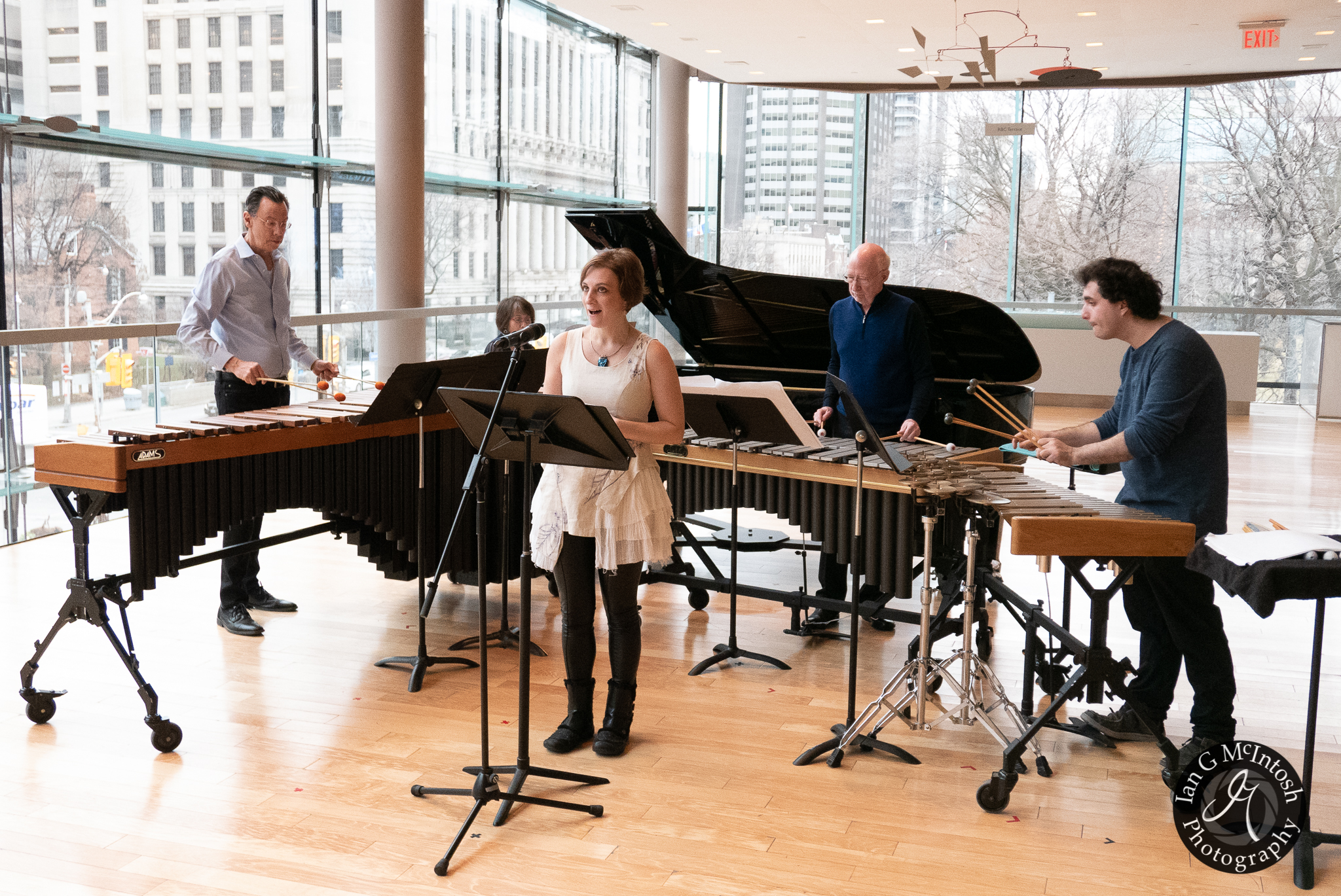 In August, 2020 I received a series of questions from percussionist Lan KaiPo regarding my piece Never in Word (1998). Below are Lan’s questions and my answers.

LK. When notating percussion instruments that are transposed (bells and crotales) do you ever question whether you should write the actual sounding pitch instead of the traditional lower pitch?  It seems the harmonic colour is very important in this music, and thus would change greatly if a performer were to play in the wrong octave.

BB. When I write for orchestra or chamber groups with mixed instrumentation I notate the score at concert pitch, except for the octave transposing instruments like piccolo or double bass. When I make the parts, I use the conventional transpositions and clefs. When writing for keyboard percussion instruments I use the standard clefs and octave transpositions in both score and parts. If you notate an instrument like glockenspiel at sounding pitch, you either have to use an extraordinary number of ledger lines, or continual 8va and 15ma indications. Of course some composers of the past, like Messiaen, did exactly that. I prefer to keep things simple, and so in my pieces crotales and glockenspiel both sound two octaves higher than written, as they usually are notated in classical orchestral music. Songbells is an instrument I have used often in my music, and although it is rarely found in orchestra scores I treat it as a transposing instrument, meaning it sounds one octave higher than written (the same as the xylophone). Marimba always sounds as written. I usually include an instruction page in my scores to clarify all of these issues. Of course you are right that if any part is played in the wrong sounding octave it will ruin the voicing, just as playing a Bb clarinet part on an A clarinet without transposing will destroy a piece. In my experience with my own music, it has been only the songbells parts that can be confusing if the player is substituting a vibraphone for the correct instrument. In that case the entire part must be played one octave higher than written (as explained in the scores).

LK. How do you think about the relationship between music and lyrics?

BB. It’s a collaboration. In my case, lyrics are a source of inspiration in a general way regarding the mood and spirit of the music, but also are very specifically connected to tempo, meter, rhythm and melodic direction. I have worked only with lyrics in English, and the poetry I have set most often is by Conrad Aiken (who wrote the poem used in Never in Word). I always work within metric structures in my music, and I find the English language usually implies either an odd meter, such as the quintuple meter used in Never in Word, or a great deal of syncopation in even meters (as found in American popular music for example). So far, all of my vocal chamber music has been set using odd time signatures, including 3/4, 5/4 and 7/4.

LK. I notice that you compose a series of compositions that all use lyrics from Time in the Rock by Aiken. Can you tell me about the Time in the Rock project? Is it still ongoing? How does the series of the works develop through time?

BB. While a college student I discovered the work of American author Conrad Aiken, and became enamored of his distinctive poetry. During 1996/97 I selected and edited a large amount of text drawn from Aiken’s epic cycle Time in the Rock (subtitled Preludes to Definition), comprised of 96 individual poems. A year later I began an extensive project, still ongoing, to set this material in various musical formats. Never in Word was the first result in 1998; followed by Time in the Rock (for narrator, four sopranos, string quartet, piano, vibraphone and marimba) in 2002; To Immortal Bloom (for soprano, cello, piano and vibraphone) in 2017; and Clear Things May Not Be Seen (for two sopranos, two clarinets, string quartet, marimba and vibraphone) in 2018. The complete poem used for Never in Word can be read HERE.

LK. In many of your compositions, the common instrumentation includes song bells, crotales, marimba, vibraphone, and piano. I think your sound organization within your chosen combination sound is unique.  Is there any particular source or reason behind this?

BB. From 1990 through around 1996 I often wrote for ensembles of keyboard instruments that spanned a range from F above low cello C up to the highest C on the piano or piccolo. Later, as expanded-range marimbas came into more general use, I was able to extend this range down to low cello C. I wanted a continuum of metalophone sound that isn’t provided by the range of any standard instrument, so I used vibraphone, songbells and glockenspiel to create it. For years I have lobbied manufacturers (including Adams and Malletech) to produce songbells with the range found on the original Deagan models (i.e., three octaves going up from sounding middle C), but so far I’ve been unsuccessful. In my opinion, if companies brought back this instrument many more composers would begin to include it in their work. I have often used a piano in my orchestrations in order to expand the bass range of the ensemble, and to reinforce varieties of colour and resonance in the music. The piano is a percussion instrument by definition as well as by its characteristic sound and articulation.

LK. Mudra is a very popular and wonderful piece and it has been performed a lot internationally. Personally, I have played the piece three times in different institutes. Is there any reason(s) in either logistics or performance challenges that Never in Word is less performed?

BB. Probably the main reason is Never in Word requires a very accomplished soprano, with a strong sense of time and rhythm. The instrumental parts are very challenging as well. Mudra is played often by student ensembles, and it is quite accessible for them. Never in Word needs a more professional-level group.

LK. Would you tell me about the Bob Becker ensemble and the members?

BB. In the early 1990s I wrote a number of pieces for keyboard quintet, which included piano, or in some cases drums and/or cymbals. Mudra and Turning Point are examples that were part of Nexus’ touring repertoire for several years. Beginning in 1994 I was writing pieces that needed stronger piano abilities than any of us in Nexus possessed, as well as pieces featuring soprano voice. I decided to organize a separate ensemble that would be dedicated to performing exclusively my own compositions. The core members were marimbist Chris Norton, pianist Nikki Stoia, soprano Barbara Hannigan, and me on vibraphone. The most recent performances of my chamber music took place here in Toronto in early February, 2020. The ensemble still was called the Bob Becker Ensemble, although only Chris Norton and I were part of the original group.

LK. I found one live performance video on YouTube. It was recorded in 2011 PASIC. I was wondering if you have any suggestions or your preference for the setup of the instruments in Never in Word.

BB. You can hear an audio recording from the premiere performance of Never in Word HERE. The ensemble on that concert included myself vibraphone, Chris Norton marimba, Ryan Scott glock/crotales, and Barbara Hannigan soprano. Those musicians all were part of the original Bob Becker Ensemble, as mentioned in my previous answer. The very fine pianist in this case was John Hawkins, who was not part of my original group. The setup you saw on the PASIC YouTube is the one I have always used for this piece – the same as can be seen in the photo above. The marimba stage-right was placed very close to the piano at a sharp angle, the bass end almost touching the edge of the piano. The vibraphone was nested in the elbow of the piano, and the glock/crotales placed stage-left next to the vibes. The soprano was lightly amplified, and the piano set at full stick.