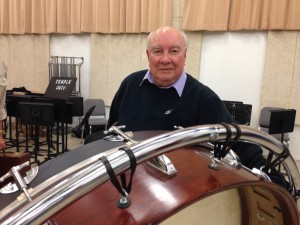 Russell and Bob and NEXUS received a very nice notice in the the Philadelphia Inquirer. David Patrick Stearns’ entertaining review enjoys covering this “bang-up occasion” – the 85th birthday tribute to Alan Abel on November 16th. The stage was so full of “instrumental hardware”, it was a case of “marimba gridlock”! Stearns points out that hearing the individual works on the program, including pieces by NEXUS’ Russell Hartenberger and Bob Becker, offered “opportunities to hear atypical sonic possibilities without orchestral clutter”.  Here’s what he has to say about Russell’s and Bob’s works:

“Hartenberger’s Cadence was full of pregnant symbolism, quoting from the funeral drums of John F. Kennedy’s cortege, with resonance into our own time…Most entrancing was Becker’s 1990 Mudra, a work full of scales from India, layered over each other with a level of atmosphere seldom heard elsewhere…”

Describing the “legendary” Alan Abel as “small but magnetic, hovering over the instruments with maternal care”, Stearns notices the bass drum that Abel designed himself, “which appeared to have been sliced in half and turned on its side”.

It is a wonderful review of all the performers and composesrs in the Philadelphia Chamber Music Society’s concert (Kimmel Center) – the audience, Stearns reports, “had an unusual hipster contingent”! – and we will give Mr Stearns the final word(s): “As we know, once percussionists hit a groove, you never know when they’ll stop”.

You can read the full reveiw at the Philadelphia Inquirer website.