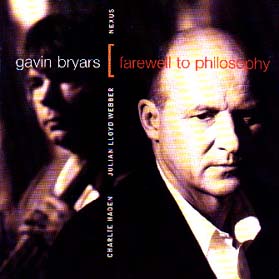 We have received a wonderful comment from a listener who just heard NEXUS performing Gavin Bryar’s One Last Bar, Then Joe Can Sing on WRCJ Detroit. He says “it was amazing!”

The piece was commissioned for NEXUS by the Arts Council of Great Britain, and NEXUS premiered this work at  Queen Elizabeth Hall in London in November, 1994. The recording for the CD, (which is entitled Farewell to Philosophy) took place in Kilbourn Hall at the Eastman School of Music in Rochester, NY, in May 1995. The CD was originally issued by Point Music, and has been reissued by ArkivMusic as part of the Bryar’s anniversary album called A Portrait. Along with NEXUS, Farewell to Philosophy features Julian Lloyd Webber,  Charlie Haden, the English Chamber Orchestra and conductor James Judd.

Gramophone reviewed the CD in November 1996, and spoke of NEXUS’s “executive expertise” and “textural invention”, and called One Last Bar… “a high-point in sound recording”:

“…varieties of tuned percussion (the glow of marimbas in contrast to the glitter of high bells), prompts some haunting modulations and fades to a tranquil coda. Quite aside from Nexus’s executive expertise and a mass of fascinating textural invention, One Last Bar … marks a high-point in sound recording. The sessions, which date from last June, were held in the Kilbourn Hall at the Eastman School of Music in the USA and report an astonishing range of sounds – from marimbas and sticks on metal to bowed crotales and songbells. The other works were recorded a few months later in London at Abbey Road and are hardly less impressive. By the Vaar (a river in Flanders and the scene of another Bryars opera) was written for – and is performed by – jazz bass-player Charlie Haden, whose specific sound (he uses gut strings) inspired a husky, mellow “extended adagio”. Much of the solo work is played pizzicato which of course underlines the jazz element, while bass clarinet, percussion and strings set up a warming backdrop. It’s a nice piece, but the Cello Concerto is rather more than that, and One Last Bar, Then Joe Can Sing, more still.”

Gavin Bryars himself describes One Last Bar… on his website :  “Commissioned by the Arts Council of Great Britain for the virtuoso percussion quintet Nexus, this piece is a reflection on aspects of percussion history, both personal and musical. The members of Nexus are my friends (I played in the Steve Reich Ensemble along with Russ Hartenberger, for example, in 1972 – the year after Nexus was formed) and I have known their playing as an ensemble for almost 20 years. The piece exploits not only the tremendous virtuosity of Nexus but rather more their wonderful musicality and subtlety.” (You can read the rest of the description here ).

Culturekiosque’s Klassiknet ran an interview with Bryars where he discussed One Last Bar…, and NEXUS, and the importance of percussion:

klassiknet: In “One Last Bar, Then Joe Can Sing“, the composition you wrote for NEXUS, the acoustical research seemed obvious.

klassiknet: World music must interest you. There were gamelan sounds in your scores.

Bryars: Absolutely. Living in England we hear a lot of Indian music. The nearest town to where I live is 25% Asian. A percussion ensemble can be as flexible and as expressive as a string quartet, and especially a group like Nexus which has lived and worked together for 25 years. Whilst on the surface, instruments like the xylophone, marimbas etc. appear inflexible, and not at all expressive, for me they are perfectly capable of being expressive in the right hands. When I was teaching at the university back in the 70s I required my students to study percussion. They had to play rhythm accurately, and come to turns with the music of the 20th Century. Otherwise, violinists, say, can get away with just playing 17th, 18th and 19th century music. It meant people had to take more responsibility as performers. It also meant that people had access to a lot of repertoire to tune percussion music such as transcriptions by Percy Grainger, things of Henry Cowell, as well as repetitive music by Steve Reich and Terry Riley and so on. I have two percussionists in my ensemble. How the whole range of percussion is used colouristically and as a full section in an orchestra is very important. In my first opera “Medea” I got rid of the violins, but I had a team of five tune percussion players, plus the tympanist. Effectively, they became like the leaders of the orchestra. They carried the musical momentum in the piece. Percussionists are key players now.”

I hope you have a chance to check out this “amazing” piece yourself! Enjoy!