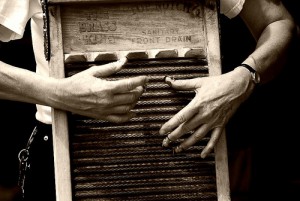 Last night, I had a wonderful meal at a great little Toronto restaurant called Southern Accent. A couple of friends remember performing Zydeco at that restaurant, some years back. It reminded me that I had some notes put away for a blog post!

Zydeco is a form of American roots music that evolved from the late 1800s among the black and multiracial French-speaking Creoles of south and southwest Louisiana.  Zydeco first caught my imagination because the word “Zydeco” reflects the pronunciation of the French “les haricots”…. and the French “haricots” are English “snap beans”!

I love that!   Snap Beans Music!    If you have prepared snap beans for cooking, you know that it is a percussive sort of activity!

Zydeco is heavily syncopated and was originally heard in house dances and then moved to the rural dance halls and nightclubs, where it was integrated with most dance music forms of the era. Its influence moved into shuffles, blues, and rock n roll. Wikipedia says that “Today, the tradition of change and evolution in the music continues, always keeping relevant while integrating even more genres like reggae, hip hop, R&B and soul.”

Another area known for Zydeco is Texas. (NEXUS has some strong ties with that state). The University of Texas Press published “Texas Zydeco” by Roger Wood in 2006, with wonderful photography by James Fraher.  You can check it out here and even browse through the book by clicking on the Google Preview button on the left side of that page.   Wood quotes Barry Jean Ancelet in the book “Cajun Music and Zydeco” who mentions field recordings now in the Library of Congress made in the 1930s. The recordings feature black Creole singers performing in the highly percussive jure style. Jures were “essentially Louisiana French shouts accompanied by improvised percussion (clapping hands, stamping feet, spoons rubbed on corrugated washboards) and vocal counterpoints.”

One of the folklorists who made the recordings, Alan Lomax, called jure “the most African sound I found in America.” Wood says, “Starting with something as simple as the skillful clapping of hands, those beats were soon replicated and amplified by the manipulation of wood, metal and bone objects commonly found on Louisiana farms of the nineteenth and early twentieth centures.”  (The “skillful clapping of hands” made me think of NEXUS performing Steve Reich’s “Clapping Music”).

The washboard or rub board, also known as the frottoir, is of the utmost importance in Zydeco. Steve Gadd playing frottoir “with one hand using a drumstick while playing drum set with Eric Clapton on a traditional blues tune.”  They suggest that the frottoir can be played with “drumsticks, church key openers, metal thimbles, drum brushes, screwdrivers, metal shoe horns taped to the fingers of work gloves…even spoons and forks but…make sure…last night’s dinner of red beans and rice has been removed.”

The intricate polyrhythms of Zydeco contrast sharply with Cajun percussion which seems subdued by comparison and is primarily supplied by a simple Triangle.  Again, Wood provides an interesting quotation from Lorenzo Thomas:

“While the triangle can be a fierce instrument in the right hands, the zydeco band’s corrugated washboard played by tapping and rubbing is capable of a wider range of polyrhythmic effects and seems to be utilized in a fundamentally African approach…With such performers the frottoir has a function similar to the grooved quiro or bead-shrouded gourd (chequere) used in Cuban and Puerto Rican salsa orchestras.”

All of this from a simple but delicious plate of brisket and collard greens last night! Check out the book, check out the music, and go snap some beans!