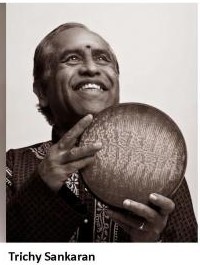 The Toronto Arts Foundation has announced its 2011 awards finalists, and we are pleased to congratulate our dear friend and fellow percussionist Trichy Sankaran. He has been named as a finalist, along with Andrew Burashko and Rita Chiarelli, for the Muriel Sherrin Award for International Achievement in Music.

Winners of the 2011 Toronto Arts Foundation Awards will be announced on Thursday, October 20, 2011 at the Mayor’s Arts Awards Lunch. The award and cash prize recognizes “an artist or creator who has made a contribution to the cultural life of Toronto through outstanding achievement in music. The recipient will also have participated in international initiatives, including touring, studying abroad and participating in artist exchanges.”  NEXUS is a past recipient of a Toronto Arts Award.

The TAF has also initiated a Finalists Portrait Series, and the beautiful still of Trichy Sankaran, above, was created by Denise Grant Photography. NEXUS has performed and toured often with Trichy,  and in recent years NEXUS has also performed with his daughter Suba Sankaran, another fine artist. Congratulations on this well-deserved recognition from the Toronto arts community!