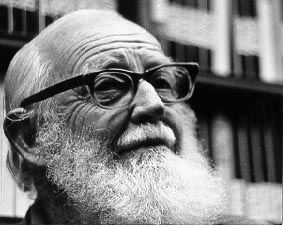 The release of the terrific new Canadian Brass recording featuring NEXUS got me thinking about other collaborations that NEXUS has enjoyed over the years. Here is a particularly unusual one:  In 1982, NEXUS created a three-volume set of recordings with Canadian poet out-of-print, but an article by Ted Shaw in the Windsor Star in October 1983, explains how the poet-percussion collaboration came about and tells us a little more about it:

“About 50 years ago, a young sailor, Earle Birney, wrote a dreadful sonnet about the Northwest Passage that he quickly forgot.

“It would be four decades or more that Alaska Passage collected dust in Birney’s pile of discarded verse until a Toronto-based modern percussion group, NEXUS, prompted him to dig it up. The senior Canadian poet now ’79 and a half, almost 80,’ took the sonnet and altered its rhythmic structure. What is left is the chant-like image of a swaying ship in brutal northern seas, called Alas-ka passage ALAS-KA pass….

“The poem is one of the most intriguing collaborations of Birney and NEXUS on a three volume series of record albums released by the percussion group last year….

“In the albums, many of Birney’s dramatic poems – he is a skillful, evocative reader of his own work – are accompanied by NEXUS, creating an aural painting of the poetry. His observations of Canadian life are often hilarious, his love poems make you blush and his sarcasm is sharp-witted.

“The development of Alaska Passage, originally written in 1934, parallels the way some of Birney’s other works have been transformed rhythmically since he agreed to collaborate with NEXUS 10 years ago.

“‘They use poems already written,” said Birney, “and they, improvise. I don’t improvise when I’m reading them, but (the performances) affect me eventually. I learn things about the poetry, like rhythmic effect and tone quality.’

“The poem Never Blush to Dream from Fall By Fury is a lyrical setting of Scott Joplin’s Chrysanthemum Rag and Birney actually sings the music with NEXUS accompaniment. On another poem, the wildly energetic McSimpton’s Annual Boat Excursion to Nanaimo, June 1949, the poet sings snippets of popular ’30s and ’40s songs with NEXUS providing the melodic and atmospheric texture….”