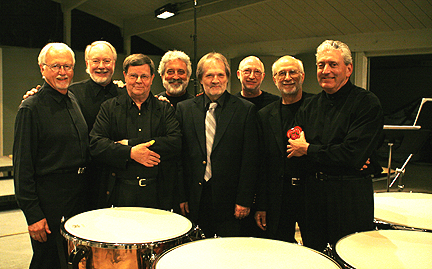 In each of four diverse programs at the Ojai (CA) Music Festival, NEXUS, the internationally acclaimed percussion quintet, brought audiences to standing ovations.Â  This was the first appearance by NEXUS at Ojai, and each of the programs was distinctive.

1) June 8, 2007 – Masterworks of Bartok, Eötvös and StravinskyThe program featured NEXUS performing classic masterpieces with Pierre-Laurent Aimard and Tamara Stefanovich in the Bartok ‘Sonata for Two Pianos and Percussion’ and in ‘Sonata per sei’ by the Hungarian composer Peter Eötvös.  Percussionists Jan Williams and Thomas Morris along with Pianists Helena Bugallo and Amy Williams joined the ensemble in an electrifying  performance of Igor Stravinsky’s ‘Les Noces’.

3) June 9, 2007 – Creative Music Making Workshop
Led by NEXUS, this workshop was open to the public and focused on freeform improvisation. The several hundred attendees listened attentively as selected audience members had the opportunity to create and record improvised music with members of NEXUS.Â  The recorded improvisations were then immediately played-back for listening and interactive open discussion.

Nexus acknowledges the support of the Canada Council for the Arts and the Ontario Arts Council.