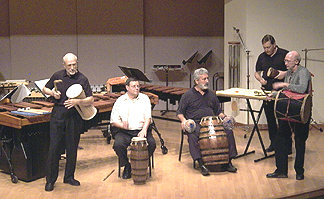 NEXUS recital programs are approximately two hours in duration with a 15-minute intermission. The music draws from NEXUS’ rich and varied repertoire of jazz and novelty ragtime music, ethnic music (works based upon drumming from India and Africa), improvisation, and contemporary works written for NEXUS by composers such as Steve Reich, John Cage, Gavin Bryars, Toru Takemitsu, and NEXUS members themselves.

Music for Pieces of Wood relies on the composer’s process of ‘rhythmic construction’, or substitution of beats for rests in a rhythmic pattern. The piece requires five performers each playing a tuned pair of large wooden dowels called claves. One player maintains a steady pulse throughout the piece while another performs a short rhythmic pattern over and over. One by one the other players build up this same pattern one note at a time, but several beats out of phase with the original pattern. This process is carried out in three sections with patterns of six, four, and three beats.

From ‘Four Rituals’ Christos Hatzis
Mvmt. II The Fountains of Bethesda
Mvmt. III Water Turning into Wine
Commissioned by the renown percussion ensemble NEXUS with funds from the Laidlaw Foundation (Canada), Four Rituals for Percussion Quintet, Chorus and Audience was completed in the spring of 2004. When the members of NEXUS, who are also colleagues at the Faculty of Music, University of Toronto, asked me to create a new work for them, I resolved to incorporate in the piece the qualities that, in addition to their brilliant musicianship, make this group unique in the world of classical music: their ability to improvise, their vast experience with a number of world music cultures and their equally vast collection of percussive instruments from all over the world.__ In addition to musically exploring the qualities that make NEXUS unique as musicians, I naturally felt compelled to explore my own interests which are related to early Christian spirituality and my ever growing desire to communicate with other people through music as deeply as I am capable of. The titles of the individual rituals refering to three miracles by Jesus of Nazareth and His Passion as recorded in the Bible and the means by which community-based amateur choirs and the audience as a whole are engaged in it bears witness to these interests__The two inner movements do not engage the audience or the choir directly, but their structure and feel still adhere more to the concept of ritual than to that of a piece of concert music. (notes by Christos Hatzis)

Telisi Odyssey is based on the South Indian kriti, Telisi Rama, by the great Carnatic composer Tyagaraja (1767-1847). The harmonies are derived from Raga Purnacandrika, and the accompanying rhythms are adaptations of the rhythmic patterns from the mrdangam, the principal drum of South Indian classical music, and from the rhythmic patterns used in Akom, a spirit possession music from the Akan people of Ghana.
Kumasi is the capital city of the Akan region of Ghana and Kerala is a province in India which has produced many of South India’s greatest percussionists, including the legendary Palghat Mani Iyer. Kumasi, the first movement of Telisi Odyssey, uses rhythmic patterns from Akom combined with melodic fragments from Tyagaraja’s kriti. Kerala, the second movement, has an adaptation of the original Telisi Rama melody with a marimba taking on the role of the mrdangam but using rhythms from both Ghana and South India. (notes by Russell Hartenberger)

These three military drum beatings which accompanied fife tunes during the 18th and 19th centuries are preceded by a drummer’s exercise, the ‘Closing of the Long Roll’. The first beating is called ‘Three Camps’ or ‘Points of War’ and was played to awaken troops in an encampment just after sunrise but not, as Gen. George Washington said, ‘before a sentry can see clearly one thousand yards around him’. ‘Ã‡a ira’ dates from the early French Revolution (1790). Its title means ‘everything will be alright’ or ‘it will happen’. After Napoleon’s defeat at Waterloo in 1815 the tune was called the ‘Downfall of Paris’. ‘Hell on the Wabash’ has as yet to be accurately dated. There were two famous military engagements on or near the Wabash River in the Ohio/Indiana territories. One was in 1791 and the other in 1811. As with ‘Ã‡a ira’, tunes were often re-named to commemorate a special event. ‘Hell on the Wabash’ became for a time ‘Hell on the Rappahannock’, probably in reference to the horrific battle of Fredericksburg (1862) during the United States Civil War. The versions rendered by NEXUS appear in the famous 1862 ‘Drummer’s and Fifer’s Guide’ by Drum-Major George B. Bruce and Daniel Decatur Emmett, composer of ‘Dixie’. (Notes by Robin Engelman)

The featured voice in this music is the African mbira, an instrument whose name literally translates as ‘tongues’, albeit tongues of metal rather than flesh. It is a type of plucked idiophone found throughout Africa and sometimes called a ‘thumb piano’ in the west. The mbira performing the leading part is a 22-keyed Shona mbira, known as ‘mbira dza Vadzimu’ (mbira of the ancestral spirits). Accompanying instruments include a marimbula (bass mbira from the Caribbean Islands), gankogui (iron bell), Axatse (gourd rattle) and a drum. The music is NEXUS’ own interpretation of a traditional Zimbabwean melody. In the Shona culture of Zimbabwe, the mbira is strongly associated with memories of departed ancestors and with the experience of remembering in general.

Will Tomorrow, I Wonder, Be Cloudy or Clear? Toru Takemitsu, arranged by Robin Engelman

The poignant quality of Takemitsu’s short lay is softened by the composer’s 1940’s pop style setting.  That style suggested to me a shuffling three-quarter time rhythmic introduction accompanied by brushes on a snare drum. (notes by Robin Engelman)

Will Tomorrow, I Wonder, Be Cloudy or Clear?
Words by Toru Takemitsu

1 A day ago held sorrow,
Today is full of tears.
I wonder, will tomorrow
Be cloudy or clear?

2 Some troubles fade to Yesterday,
Other trials now are here.
I wonder, will tomorrow
Be cloudy or clear?

Maru to Sankaku no Uta Toru Takemitsu, arranged by Robin Engelman
(A Song of Circles and Triangles)

This Takemitsu song reminded me of Doo Wop, a commercial rhythm and blues vocal style that flourished in the 1940s and 1950s. The name Doo Wop was probably inspired by the nonsense syllables used by back up vocalists to accompany the lead singer. Takemitsu uses the word ˜wa’ in this fashion at one point in his work.  In this arrangement, I have kept Takemitsu’s melodies, but the rest is my personal fantasy on Doo Wop. (notes by Robin Engelman)

Maru to Sankaku no Uta
Words by Toru Takemitsu

The sky is blue
The ocean is deep
The earth is round
I’m telling you, it’s a little star!