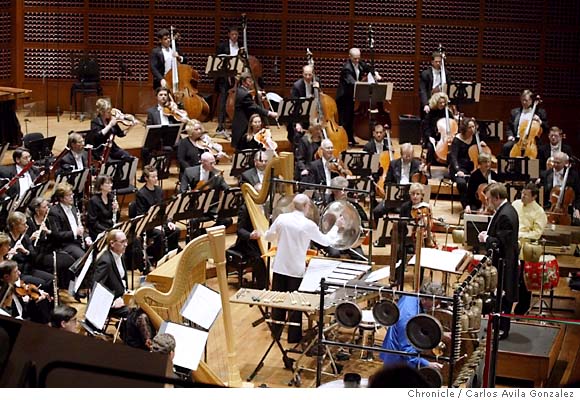 Patrons walking into Davies Symphony Hall for Thursday night’s San Francisco Symphony concert could tell right away that something out of the ordinary was afoot.

There were multi-colored ribbons stretching from the stage all the way across the orchestra section to the first tier, with chimes hanging from the ledge. On stage, there was percussion everywhere — bells, gongs, drums and mallet instruments of all kinds, sprawled across the front and back of the playing area.

What brought all this hardware together was the first Symphony performance of “From me flows what you call Time,” Toru Takemitsu’s large- scale 1990 opus for percussion ensemble and orchestra. The Canadian ensemble Nexus, for whom the piece was written, served as soloists, with Sir Andrew Davis conducting the orchestra.

Anyone expecting a percussion lollapalooza, though, full of rhythmic vitality and the loud thwacking of drums, would have been surprised.

At nearly 35 minutes, “From me” is larger in size and rhetoric than many of the composer’s pieces, but it boasts the same kind of gentle delicacy that informs nearly all of Takemitsu’s music. Textures are sparse and crystalline, the harmonic language consonant, the melodic phrasing wispy and lyrical.

What’s most distinctive about the piece is its theatrical sense of ritual. After an extended, meditative flute solo (hauntingly delivered by Robin McKee), the five soloists — Bob Becker, Bill Cahn, Robin Engelman, Russell Hartenberger and Garry Kvistad — made their entrance through the audience, walking with slow stateliness and giving little pings with small handheld cymbals.

At the composer’s direction, they were dressed in color-coded outfits of red, blue, white, green and yellow (pursuant to some kind of cosmological theme that wasn’t easy to decipher). Even the setup of the instruments and the succession of solos looked meticulously choreographed.

In form, the piece is essentially a concerto — though one from which any hint of conflict is characteristically absent. The percussionists do their thing, sometimes in tandem and sometimes individually; periodically the orchestra weighs in with a sweet-tempered chorale. At the midpoint and again at the end, two percussionists tug on the ribbons to make the chimes sound from the back of the hall.

It’s all perfectly lovely, and Davis led a canny, translucent performance. But to these ears, Takemitsu’s music, both in this case and elsewhere, only rarely transcends prettiness. Those tinkly rock gardens of sound always cast a spell on first hearing; they begin to cloy, though, well before 35 minutes have passed.

Given the nature theme in the piece — the five percussionists are meant to represent the elements of sky, water, fire, earth and wind — Gustav Holst’s astronomical suite “The Planets” made a funny but apt companion piece. And Davis’ forthright, fervent reading drew a sharp contrast between Holst’s rude energy — bordering here and there on the obvious — and Takemitsu’s endlessly refined vapors. There were some rough spots, including a blowsy beginning to “Jupiter” and some awkward near-misses in the quick “Mercury” and “Uranus” movements.

But most of the piece exuded the necessarily healthy ruddiness, from the thrillingly aggressive “Mars” to the elusive, shimmery textures of the final “Neptune” (Holst’s suite, written in 1916, predates the discovery of Pluto, to say nothing of Sedna). Luxuriant solos by concertmaster Alexander Barantschik and cellist Michael Grebanier only added to the seductive charms of “Venus.” 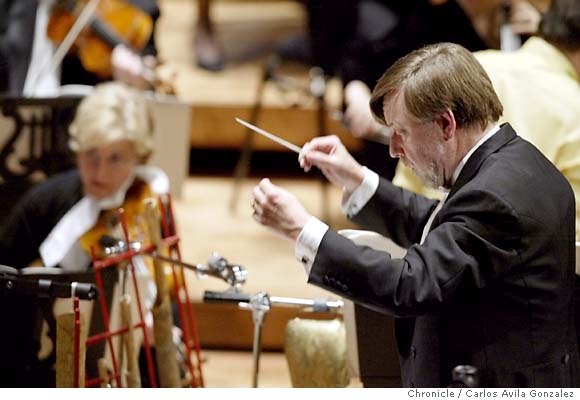