From time to time I receive inquiries from percussionists – students and professionals – regarding instrument selection and repertoire.  One such inquiry arrived recently seeking advice on the “cricket callers” (split bamboo) in John Cage’s “Third Construction.”

Q:  “I recently discovered your video of Nexus performing the piece in 1984.  I would love to know what you used for “cricket callers,” as I’ll be playing the same part you did for that 1984 performance.”

To see the NEXUS performance go to :  https://www.youtube.com/watch?v=C_ZHd-ReIUg

A:  “Third Construction” was a standard work in the NEXUS repertoire for over 20-years, and NEXUS performed it many times with John Cage in the audience – including Cage’s 70th birthday “Musicircus” in 1987 at the Embassy Theatre in Los Angeles.

The instruments used on the 1984 Seoul, Korea performance (on the YouTube video) were split bamboo tubes that were called “devil chasers” when I purchased them from Steve Weiss in the 1970s. These were also used on the 1989 NEXUS recording of the piece (“The Best of NEXUS” – NEXUS CD #10251). 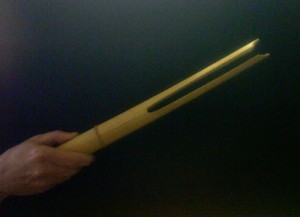 In recent performances with NEXUS and elsewhere over the last 10-years I have used small plastic toy shakers that I purchased in a toy store for 50-cents each. (photo below).  I wish now that I had purchased the whole box of toy shakers, because I have not seen them anywhere else since. 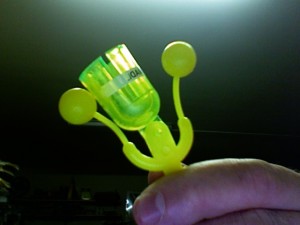 The main problem with the “cricket caller” part is that while the “devil chasers” are split bamboo as indicated, it’s not possible for these instruments to play a tremolo as notated in the part; my decision was to play a stream of 8th-notes instead of tremolos.  Cage never said a word about these instruments to me, so I assume they was OK with him. That being said, I now use the plastic toys because I really like the higher sound (more like a cricket sound), especially in contrast with the instruments used by the other players, and the tremolos are easily playable.