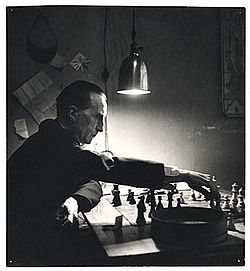 The musical Chess recently completed its run here in Toronto, and I just finished reading The Eight by Katherine Neville. The latter is a fascinating romp of a novel featuring a mystical chess set and a tapestry of historical characters scouring the world for it. Not least among them is the opera composer Francois-Andre Danican Philidor, who caught my attention especially because NEXUS and timpanist David Kent performed Marche de Timbales at a concert last Spring. Marche de Timbales was written by Francois-Andre’s father Andre (Philidor the Elder) and uncle Jacques (Philidor the Younger). Neville places pivotal scenes not only at the Paris premiere of Philidor’s opera Tom Jones, but also at the London soiree where he (a Grand Master) played one of his famous blind-folded chess matches.

Cage created his submission as a composition painted in ink and gouache on a 19 x 19 inch piece of masonite, set out like a chess-board. Each of the 64 squares are filled with music written in Cage’s hand. Robin Engelman prepared the program note for NEXUS’ rendition of the piece and explains that the work’s
“22 systems read from left to right as do Cage’s prepared piano scores from the same period. No documentation exists of this music ever having been played, nor are instrumentation, tempi or dynamics indicated.” 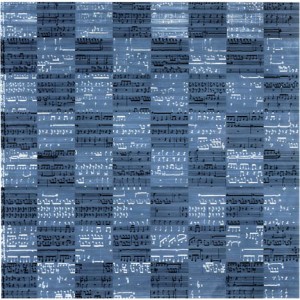 Ed Nixon recently posted on his “Musicians” page on Facebook a link to an article at NPR about music such as Chess Pieces that is “music to be seen as well as heard”. You can check it out here. NPR also has a full Cage archive that you can access from the same page.

When the Levy Gallery exhibition closed, a private collector purchased Chess Pieces. Over time, the work was considered lost, or at least largely overlooked by Cage scholars. In 2005/2006 the Noguchi Museum in New York City presented The Image of Chess Revisited and pianist Margaret Leng Tan transcribed the music and recorded it to be played during the exhibition. At NEXUS’ request, percussionist Brian Nozny transcribed and arranged Tan’s piano transcription for percussion quintet.

Duchamp introduced Cage to the game of chess, and they played often. In fact, Cage wrote another chess piece in 1968 called Reunion, performed by Cage and Duchamp at Ryerson Polytechnic here in Toronto a few month’s before Duchamp’s death.  Lowell Cross constructed a chess board equipped with photoreceptors that served as a gating mechanism to transmit or cut off sound produced by other musicians and to control lights. John Cage and Marcel Duchamp played the game that created aleatoric music – a lovely word that comes from a root meaning “dice” (another game!).  Elements in aleatoric music are left to Chance. The other participants in the 1968 Ryerson event included Teeny Duchamp, David Tudor, Gordon Mumma, and David Behrman. Shigeko Kubota’s 1970 book Marcel Duchamp and John Cage contains photographs and a recording of this performance.

Some of the above information comes from NEXUS performed The Rite of Spring in an unusual arrangement for percussion and two pianos with the piano duo 2X10 last season.

So, chess lends itself to music – and musical terms are used in Chess. The Oxford Companion to Chess cites the chess terms “composer” (one who creates chess puzzles) and “transposition” (two different sequences of moves that lead from one given position to another),  as well as notation, score, tempo, theme and variation, minimal composition, major and minor, and phase and echo!

And I think that brings us to a Closed Position.

(A position without any open or semi-open files).